For more details about the different structures, take a look at this post: The Missing Female Pleasure Parts.

It’s simple: check out this information. Then explore out your own or a friendly and willing vulva-owning person’s body. Once you experience all the parts, you’ll be your own expert. Once you know, you’ll be vulvawise!

PS: If you’re wondering what happened with the Spanish translation fund-raising project: we succeeded! Look out for the Spanish version of Women’s Anatomy of Arousal by the end of 2017! 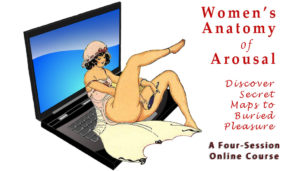 GET THE BOOK
You can have it by reading the award-winning Women’s Anatomy of Arousal book. It’s available as a physical book, as a Kindle or an audiobook!

TAKE THE COURSE
You can ‘attend’ the recorded 4-session online Women’s Anatomy of Arousal course.

What Does That Mean?

To be VULVA WISE means that you understand the basics of female genital anatomy, including the parts that most people (yes, even sex educators, doctor, midwives and other experts) don’t know about.

What Is This Image? 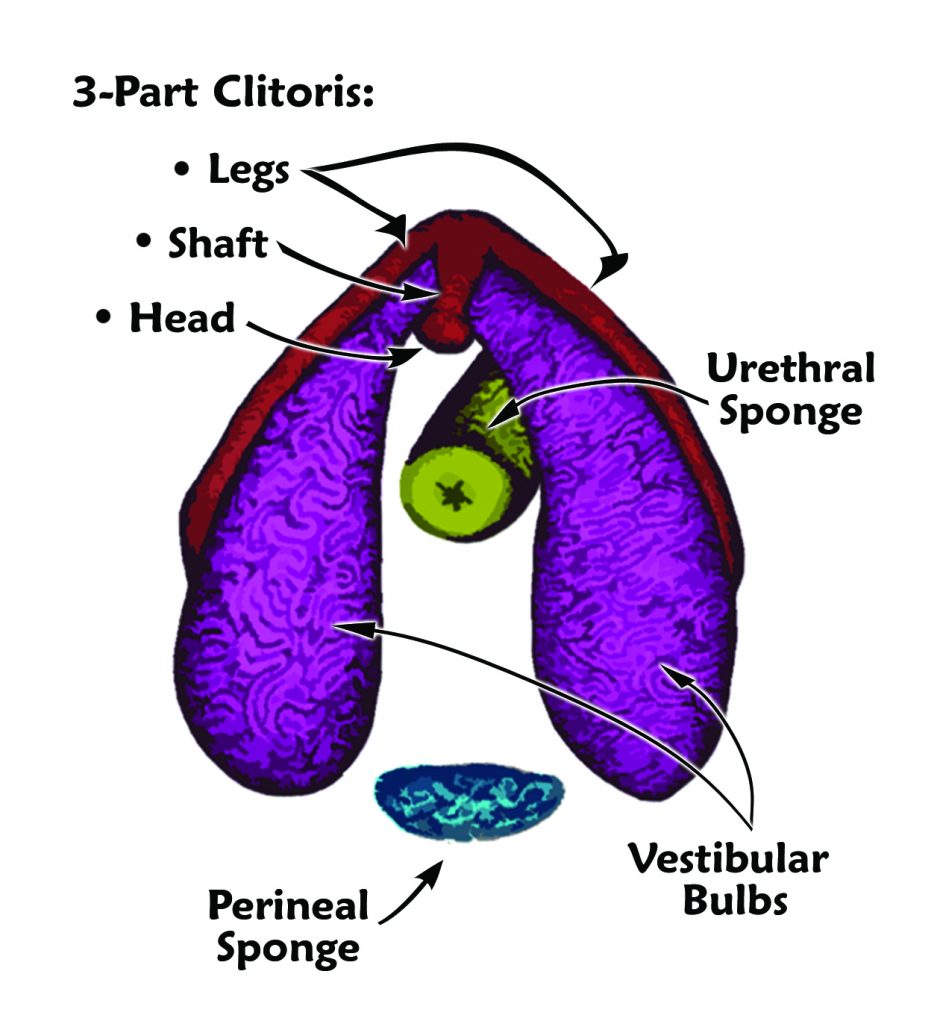 This is the Female Erectile Network!

It’s an awesome set of interconnected but separate female genital structures all made out of erectile tissue.

The most familiar form of erectile tissue is in the penis. It’s what enables them to transform from small and soft to big and hard.

Do Women Have the Same Stuff?

Where Is It All?

The erectile tissue makes up the Female Erectile Network. The structures include the three parts of the clitoris; the paired vestibular bulbs; the urethral sponge; and the perineal sponge.

For more details about the different structures, take a look at this post: The Missing Female Pleasure Parts

For more information on what’s been misunderstood and neglected, here’s another post: Lost Sexy Bits.  (It includes a quickie home play assignment.)

It’s simple: check out this information. Check out your own or a friendly and willing vulva-owning person’s body. Once you experience all the parts, you’ll be your own expert. Once you know, you’ll be vulvawise!

Find out why Dr. Christiane Northrup has called Women’s Anatomy of Arousal “the most comprehensive, user-friendly, practical and uplifting book on women’s sexuality I’ve ever read. It’s the gold standard!”

Get More Women’s Anatomy of Arousal!

WINNER, 2010 BOOK OF THE YEAR AWARD!
(From The American Assoc of Sex Educators, Counselors & Therapists)

It’s available as a physical book, as a Kindle or an audiobook!

TAKE THE COURSE!
You can ‘attend’ the recorded 4-session
online Women’s Anatomy of Arousal course.

Think you already know your way around down there? Well, take the quiz and find out! Sheri says, “I thought that I knew, especially after my extensive medical education as well as equally intense alternative health explorations and studies. And yet, I didn’t know all there was to know. I was shocked by what I didn’t learn in school!”

Identify the Parts Here: Be VulvaWise

Find Out What’s Missing and Why Here: The Missing Female Pleasure Parts

Is This Important Information for You? If so, please help us share it: Women’s Anatomy of Arousal Spanish Translation Project 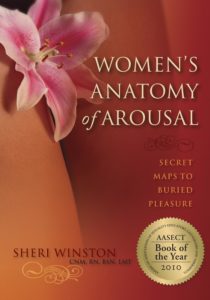 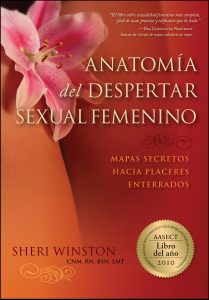 Women’s Anatomy of Arousal provides the life-changing and integral map that all women (and their partners) need.

Now, we want to get this information into the hands of the multitude of people who speak Spanish. Please help us fund this important translation!

Go here to donate
(and review the cool and hot rewards)!

Ways You Can Help

This is an ALL OR NOTHING campaign. Which means if we don’t raise our goal, we don’t receive any funds. So please do one (or both) of the following if you wish us to succeed!

1) BACK THE PROJECT at whatever level you can. EVERY contribution counts!

Please help make the campaign a success and be a part of the team that gets this vital information out into the Spanish-speaking world!

Donate NOW (and get cool and hot) perks!

Sheri’s book, Women’s Anatomy of Arousal – Secret Maps to Buried Pleasure contains unique and extensive anatomy illustrations (drawn by Sheri!) that show, in great detail all of the parts women have, how they’re connected and how to make them happy! In fact, it won the 2010 Book of the Year award from AASECT (the American Association of Sex Educators, Counselors and Therapists) due to this ground-breaking understanding of female sexuality and anatomy.

“A must-read for every woman on Earth!!! I am 24 and highly recommend it to all women, to get the full understanding and knowledge of your body and pleasure that we are entitled to, have a right to and most importantly that there is nothing filthy, wrong or sinful about wanting pleasure, feeling it and having it!!! Please read this, your perception will change 360°” – Simona Ocelkova (Slovakia)

Check it out! Or

just go ahead and grab a copy! Click on the book, right here -> 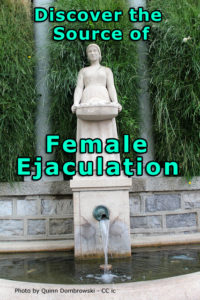 In ancient India, female ejaculate was known as sacred Amrita or the Nectar of Life. In Traditional Chinese Medicine, it’s called White Moon Flower Medicine. Western science is beginning to catch up with this ancient wisdom, but while there is more research then previously, we still lack a consensus about the existence of many of the structures that make up the whole female genitalia and the process of female ejaculation.

Women have a network of interconnected structures that are all made of erectile tissue. I call it the Erectile Network. The Erectile Network is a matrix of structures that includes all three parts of the clitoris, the paired vestibular bulbs, the perineal sponge and the urethral sponge. Women can become aroused and orgasmic by stimulating any of these structures (or in many other non-genital ways as well) but, in general the best arousal and orgasms happen when all of these structures are thoroughly stimulated.

Pound for pound, inch for inch the female erectile network contains the same amount of erectile tissue as a penis. Erectile tissue is mostly composed of erectile capillaries, which are tiny specialized blood vessels that have the capacity to fill with blood. This is engorgement which is what causes erectile tissue to swell, become harder and more sensitive. 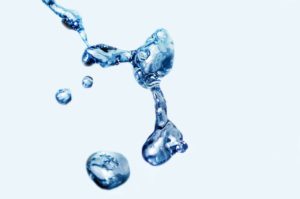 One of the structures in the network is the urethral sponge (aka the female prostate since it’s analogous to the male prostate). The urethral sponge is a tube that surrounds the tube of the urethra – think of it like a roll of paper towels surrounding the inner cardboard tube. It’s located above the roof of the vagina. The bottom of the tube is what is currently (and incorrectly) being referred to as the G-Spot.

The urethral sponge is comprised of both erectile and glandular tissue. The glands are the Paraurethral Glands (aka the Skene’s Glands). They’re tiny tubular structures that are enmeshed in the erectile capillaries — think of them like the hair roots of a plant threaded throughout the soil of the erectile tissue. The tubular glands end in about thirty openings along the urethra, with two slightly larger ducts just inside or just outside the urethral orifice. In other words, the glandular tubules empty into the urethral canal. In some women, there are additional openings along the sides of the vaginal vestibule.

These glands are the source of female ejaculate. The fluid originates in the circulatory system. The watery part of the blood, the plasma diffuses through the wall of the capillaries, enters the glandular tubule, mixes with the products of the gland and then emerges into the urethra. From there it can either emerge from the urethral opening or back-up into the bladder.

Female ejaculation is the expulsion of that fluid in a drip, gush or squirt. It can be a few drops, a small puddle or a huge flood. In fact, since the original source of the liquid is the circulatory system, there’s a huge fluid reservoir and women can continue to make fluid and have repeated and profuse amounts of ejaculate.

Women may squirt once or repeatedly, occasionally, sometimes, frequently, or always. Female ejaculation doesn’t always accompany orgasm. It can happen with high level arousal although for many women it does commonly happen with orgasm. 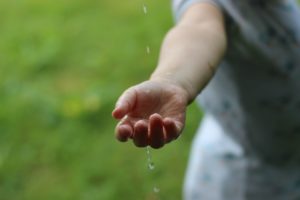 Ejaculate is not urine, although it spurts out from the urethra. That’s the same hole pee comes out of, so it’s understandable that people might think it’s urine. But it’s not yellow, doesn’t smell like pee, doesn’t have the same chemical make-up as urine (no urea, no nitric acid). That’s because it’s not urine and doesn’t originate from the bladder. The fluid does contain Prostate Specific Antigen (PSA) and Prostatic Acid Phosphatase just as the male prostate fluid does.

While some women are natural ejaculators, it’s a learnable skill and any woman can learn to do it. It’s not required. This is a totally optional skill. I will say though that having ejaculatory orgasms is a mind-boggling, intense and goddess-like experience, so it may be something that you want to learn to do! Being a gushing goddess (or being with a gushing goddess) is glorious!

BE VULVA WISE: What Does That Mean? “Read more about the erectile network and radical genital anatomy from your personal anatomy geek!”

Is there Or Is There Not A G-Spot? “Confusion Still Reigns – Clear It Up Now!”

G-Spot Reality Check “Is There or Is There Not A G-Spot?”

The Missing Female Pleasure Parts “The Search for Buried Pleasure” 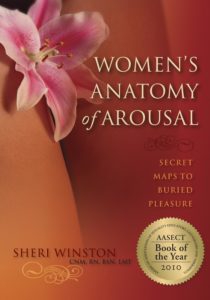 Women’s Anatomy of Arousal — Secret Maps to Buried Pleasure to see more detailed images of these structures, to learn more about all the parts that women really have and the amazing things they can learn to do with them.

Another way to learn is to ‘attend’ (watch) any of these recorded Online Courses: